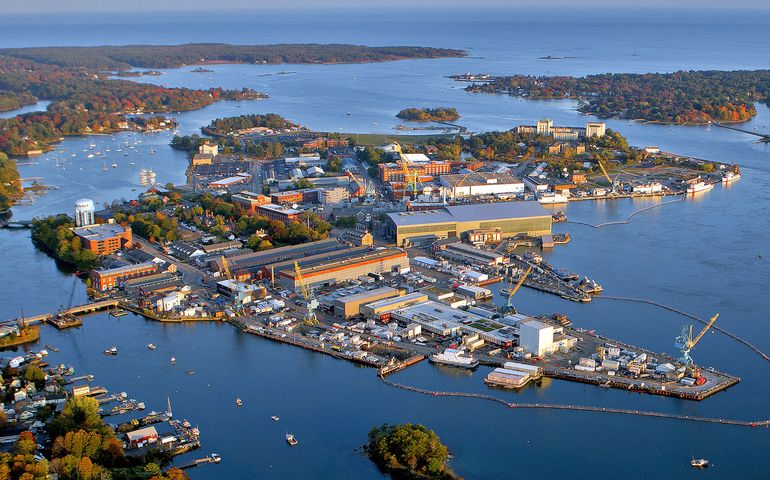 The list, in its sixth year and compiled by Maine Life Real Estate in Scarborough, measures which towns and cities had the biggest increase in single-family home sales over the previous year.

Last year set a record for single-family home sales and median price in Maine, 33% of it from out-of-state sales, with 81% growth in the luxury market (houses over $1 million), and 25% growth in luxury property, Dava Davin, of Portside Real Estate, told the MEREDA Forecast Conference last month.

Cumberland and York counties, Maine's two most populated, accounted for 40% of 2020 sales.

Out-of-state trend started before pandemic
The trend of out-of-staters choosing Maine was already on the rise before the pandemic.

Rob Edgerley, hottest towns guru and founder and CEO of Maine Life Real Estate, two years ago said that he's seen at his brokerage that when people get to a point where they can choose where they want to live, those with a seasonal connection to Maine choose Maine. He two years ago predicted Old Orchard Beach, ninth on this year's list, would grow as a destination for out-of-staters buying Maine homes.

"One thing I hear a lot is, 'I always come up here to Maine in the summertime,'" he said after the 2018 list came out. The largest group his firm deals with is from Massachusetts, people in their late 50s or 60s who are looking for a quality of life place to live.

“I think they’ve figured it out,” he said at the time.

Besides Old Orchard, Wells, another longtime traditional Massachusetts summer refuge, is also on the list, at number 5.

To determine the list, Maine Life gathers data from the multiple listing service, operated by Maine Real Estate Information Services Inc., and calculates which Maine municipalities had the largest increase in home and condo sales, including both existing homes and new construction. The list only looks at municipalities with a volume of 130 units or higher.

Just missing the top 10 were Eliot, Sanford and York — all in York County — and Winthrop and Winslow, in Kennebec County.

The Kennebunkport median price was helped along by the most expensive spec home ever to sell in Maine, a $5.95 million oceanfront (of course) home sold to an out-of-state buyer by by ReMax/Shoreline, with LInda MacDonald Associates - Legacy Properties, Sotheby's International Realty, of Portland, representing the buyer.

2. Kittery
Maine's oldest and southernmost town was the eighth-hottest town in 2019, the only one in 2020 that was also hot the previous year.

Cumberland County sold 65% of its homes at or above asking price, Davin said at the MEREDA conference. From May to November, average days listed for homes for sale in the county was less than a week.

Rockland has long been synonymous with Maine's iconic sea urchin, lobster, and is also home to two influential downtown museums, the Farnsworth Art Museum and the Maine Museum of Contemporary Art.

The Abenaki Indians called the area Webhannet, meaning "at the clear stream," a reference to the Webhannet River, which flows into the Atlantic and helps form the Wells National Estaurine Reserve, which lines the town's coastal area. The area is also lined with beaches — Wells, Moody and Drakes Island — which have for generations been the summer home for out-of-staters, particularly from Massachusetts.

Brewer was famous for its brick-making industry throughout the 19th century — most of the Back Bay and South End neighborhoods of Boston were constructed using bricks made in Brewer. Nowadays, it's more of a location for people who work in Bangor, Maine's third-largest city, and likely popular for the same reason Hampden, another Bangor-adjacent town, was as Maine's hottest town of 2019.

Across the Androscoggin River from Lewiston, Maine's second-biggest city, Auburn is also an easy-on to the Maine Turnpike and 30 miles from Portland. The city has 38,000 acres of land, 55% of which is undeveloped and has undertaken a robust marketing campaign to lure businesses, developers and new residents.

Fun fact about Gray: during the Civil War, the town proportionately sent more soldiers to conflict than any other town in Maine. The town is also on Little Sebago Lake, with proximity not only to the state's two largest cities, but its popular Sebago Lake Region.

Old Orchard, in between the Biddeford-Saco area and the Portland-South Portland-Scarborough area, has been a popular tourist destination since the late 1800s, not only for U.S. residents, but also is know for being a destination for Quebecois.

The town is on the Androscoggin River and in December 2019 hired a new economic development director as part of a push to reinvigorate the former mill town.

For a more in-depth analysis of this year's hottest towns list, be sure to check the Feb. 18 Real Estate Insider, which will include discussion with Edgerely on the 2020 results and what he expects for 2021.

According to the latest CoreLogic Home Price Insights Report, nationwide home values increased by 8.2% over the last twelve months. The dramatic rise was brought about as the inventory of homes for sale reached historic lows at the same time buyer demand was buoyed by record-low mortgage rates. As CoreLogic explained:

“Home price growth remained consistently elevated throughout 2020. Home sales for the year are expected to register above 2019 levels. Meanwhile, the availability of for-sale homes has dwindled as demand increased and coronavirus (COVID-19) outbreaks continued across the country, which delayed some sellers from putting their homes on the market.

While the pandemic left many in positions of financial insecurity, those who maintained employment and income stability are also incentivized to buy given the record-low mortgage rates available; this is increasing buyer demand while for-sale inventory is in short supply.”

According to the National Association of Realtors (NAR), the current number of single-family homes for sale is 1,080,000. At the same time last year, that number stood at 1,450,000. We are entering 2021 with approximately 370,000 fewer homes for sale than there were one year ago.

However, there is some speculation that the inventory crush will ease somewhat as we move through the new year for two reasons:

1. As the health crisis eases, more homeowners will be comfortable putting their houses on the market.

2. Some households impacted financially by the pandemic will be forced to sell.

Low mortgage rates have driven buyer demand over the last twelve months. According to Freddie Mac, rates stood at 3.72% at the beginning of 2020. Today, we’re starting 2021 with rates one full percentage point lower than that. Low rates create a great opportunity for homebuyers, which is one reason why demand is expected to remain high throughout the new year.

Taking into consideration these projections on housing supply and demand, real estate analysts forecast homes will continue to appreciate in 2021, but that appreciation may be at a steadier pace than last year. Here are their forecasts:

There’s still a very limited number of homes for sale for the great number of purchasers looking to buy them. As a result, the concept of “supply and demand” mandates that home values in the country will continue to appreciate.